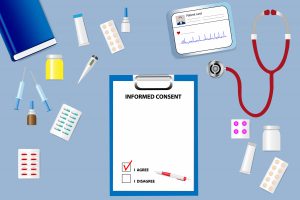 The Court of Appeals first addressed the surgeon’s argument that the patient failed to present expert medical evidence as to causation. The surgeon argued that no expert evidence was presented establishing that anything done during the fourth procedure caused the patient’s nerve injury. In response, the plaintiff argued that the surgeon’s own testimony that the fourth surgery caused permanent nerve injury was evidence of causation from a medical expert. The Court also noted that the medical review panel member who testified had testified about the risks of the procedure. With the Court addressing the surgeon’s argument as a sufficiency challenge, the Court found that there was substantial evidence of probative value supporting the judgment on this issue.

The Court of Appeals next addressed the surgeon’s argument that the patient failed to present expert medical evidence on the fifth element of an informed consent claim, i.e., that a reasonable person who was properly informed of the risks and complications of the procedure would have refused the treatment. The Court reviewed Indiana precedent on informed consent claims, including the distinction between what a “reasonably prudent physician” would believe necessary to disclose, as proven by expert testimony, and what a “reasonably prudent patient” would want to know. While prior precedent indicates expert testimony is required to determine what a reasonably prudent physician should tell a patient, unless such falls within a layperson’s understanding, and whether actual damage resulted from the inadequate disclosure, no expert testimony is required as to whether a particular disclosure did or did not occur, whether the plaintiff would have chosen a different treatment if advised of the risk, and whether a reasonable person would have chosen a different course of medical treatment if he or she had been adequately informed.

Lastly, the Court of Appeals addressed the surgeon’s argument that the jury verdict was excessive. The Court noted that evidence had been presented as to the patient’s life expectancy, the permanent nature of his nerve injury, and how the injury affected his life and work. In reviewing the evidence, the Court of Appeals, being unable to reweigh the evidence or reassess witness credibility, concluded that the trial court did not abuse its discretion in denying the motion to correct error.

Informed consent cases are notoriously difficult to prosecute for even the most skilled Indiana medical malpractice attorneys.  However, the plaintiff in Glock ran the proverbial gauntlet to achieve and uphold a verdict, perhaps signaling a shifting climate in what jurors and courts believe is reasonable when informing a patient of the risks and benefits of a medical procedure.   You can read the full opinion here.