On Halloween otherwise fiscally responsible and sensible adults spend oodles of money and countless hours to costume their children and let them visit the homes of neighbors and strangers alike, knowing a hardball negotiation will ensue with the youngster proclaiming, “Trick or Treat.”

Most homeowners will relent, tossing a treat into the child’s bucket or bag, with the toughest response to the demand being the question, “And who are you supposed to be?” Some reluctant children may stand, stone-faced waiting for candy before being prompted by their parents with, “What do you say?” Homeowners who dare reject the offer or fail to arm themselves with sufficient authority, er candy, face the possibility of a trick or, more likely, a sad, dejected face.

I have yet to hear anyone say to a child, “You are not going to do anything if I don’t give you candy. Now go away.” I am sure, however, that someone somewhere has directly called a ghost, ghoul or goblin’s bluff.

I had a law school professor who chose a different tactic. He described to us how he would turn the lights out at his home on Halloween—or “Beggar’s Night” as it was known in the local community—to discourage visitors. However, knowing that hope springs eternal in children, he would then sit in the foyer with a glass of scotch waiting and listening. He glowed like a jack-o-lantern in describing to us the disappointment muttered by those children who made the trek up his sidewalk to find no candy-bowl outside and no answer to the doorbell. His choice of tactic was to simply refuse to engage. As you can tell, he was one creepy dude, although his class was always entertaining.

More hardball negotiation takes place on Halloween than any other day of the year. However, with some limited exceptions, there is a tacit acknowledgment by participants of the rules of engagement and the inevitable outcome for the successful child-negotiator of a bag full of candy and a stomach ache.

In my “real world” experience as an attorney and mediator, there are some similarities. The most similar situation I can muster is when a Judge effectively declares that the participants must engage in negotiations via an order to mediate. Thus, there is no doubt a negotiation should ensue.

Like Halloween, the day for the mediation is set and the parties know generally what will transpire. Thereafter, the parties will expend time and money preparing, dressing up and traveling to the mediator’s office. Once at the mediation, the mediator will prod them in private sessions about the perils and costs of ongoing litigation and question whether they might expect a trick or treat at trial if the case proceeds. The parties will be counseled that here, unlike in a courtroom, they control their own fate.

However, like my curmudgeon professor turning the lights off, I have seen litigants who have refused to engage in the process by filing a motion to vacate the order to mediate on the basis that they do not wish to negotiate, as their client has done nothing wrong. Others may call the opposing side and inform them that they’ll attend the mediation to listen in good faith, but have no plans of making an offer.  For example, defense counsel in a medical malpractice case may say, “Sorry, my client has a consent to settle clause and it’s just not going to happen. He’ll come and sit, but you’ll be wasting your time.” Others may say that they have reviewed all the information, have the authority to offer $X and will not have any authority to offer more than $X at mediation. However—perhaps hearing a sigh or throat clearing on the other end of the phone—they will then likely add that if there is new information presented, they will consider it and may increase their offer, but only after mediation and only if and when they are able to get additional authority. Others simply walk out early when they get an “outrageous” demand.

These are all likely hardball tactics being used by the side employing them to gain a strategic advantage or to lessen the opposing party’s expectations during negotiations. Generally speaking—since mediation is considered a voluntary process—there is no rule against such activities, as long as the party is otherwise mediating in “good faith,” hence the caveat that they will listen and, perhaps, increase their offer later. Some take the position that by being “straight up” about their client’s position prior to mediation, they are acting more transparently than by otherwise leaving the impression that they will negotiate freely at mediation, thus saving both time and money.

The side on the receiving end of these tactics may employ hardball tactics as well. They may tell the Judge they agree that mediation is pointless. They may tell the opposing counsel that they will not be moving off their demand of $Y unless and until they hear new information, but will likely not be making any further moves off their demand at mediation. They may say that they have no interest in accepting any offer at mediation, because their client wants their day in the courtroom and the justice that will be dispensed by a jury; however, they will, nonetheless, attend the mediation session and listen. They may make an “outrageous” demand and–when a “nuisance” offer is made–they then pack their things and leave muttering how it was an “utter waste of time.”

This Halloween, as waves of Trick-or-Treaters fill the streets and pile onto neighborhood doorsteps to demand treats, consider a brief experiment in negotiation. 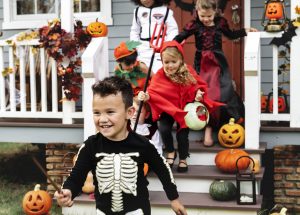 Ponder the response you might get if you at first, in jest, refuse to engage in the negotiation by saying, “May I help you?” and feigning surprise, before adding, “Oh, I forgot. Sorry, I don’t have any treats.” Or, how about, “What’s your question again?” Will the child relent, turn and begin to walk away? What if you turn your lights out like professor creepy? What will you hear? What if you were to wait until the children reach your door, then turn off all the lights as they sit wondering on the porch? Will they even knock or ring the doorbell?

When you reveal the charade and do eventually give candy, will a child—like my then-5-year-old son once did to his parents’ chagrin—raise the stakes by declaring, “I like candy X, not candy Y!” Will you say, “Tough” or “Sorry” or dig in for a different piece? Or, might a child employ one of my son’s other tactics: “Can I have 2?” How will you then respond?

As my son has gotten older, he has gotten tougher.  I once asked him, “What if someone doesn’t give you candy when you say Trick or Treat tonight?” His response concerned me a little: “You’ll see.”

We take Halloween and its teachable moments about dealing with hardball negotiation tactics for granted. This Halloween is a day to perhaps, in jest, test your negotiation skills a little when faced with the inevitable. And, above all, have fun and be careful out there.