CORONAVIRUS UPDATE: How We Are Protecting and Serving Our Clients 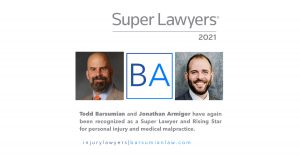 This year marks Barsumian’s fourth consecutive selection as a Super Lawyer in the field of personal injury.  Super Lawyers recognizes no more than 5 percent of the attorneys in Indiana.  Barsumian was previously selected as a Rising Star on four occasions.  Armiger, recognized for the area of medical malpractice, has now been selected to the Rising Star list on five occasions.  The Rising Stars designation recognizes attorneys 40 years old or younger and represents only 2.5 percent of the attorneys in Indiana.

Barsumian and Armiger are proud of this recognition and look forward to continuing to serve their clients in the Indianapolis and Evansville area in the areas of personal injury, medical malpractice, and wrongful death.

The United States Court of Appeals for the Seventh Circuit recently requested the Indiana Supreme Court address two questions through a process known as certification of questions.  Both Seventh Circuit Rule 52(a) and Indiana Rule of Appellate Procedure 64 recognize federal courts may seek guidance from a state’s highest court on questions arising under the law of that state which will control the outcome of a case pending in federal court.

The questions arose out of a tragic car crash in Gibson County, Indiana, which claimed the lives of two drivers and a passenger.  Sylvia Watson was driving from a repair shop in Owensville, Indiana to Princeton, when she approached a red light and exclaimed to the sole survivor of the crash, her granddaughter/passenger, Brandy Mayer, that she could not stop the vehicle.  Watson’s vehicle struck a vehicle driven by Claudine Cutchin, whose daughter, Adelaide, was in the passenger seat.  Claudine died at the scene and Watson and Adelaide died later from the injuries suffered.

A blood test on Watson revealed opiates in her bloodstream and Mayer recounted Watson had taken two pills before leaving the repair shop.  It was later discovered that a physician had prescribed Watson eight different medications, including an opioid and muscle relaxers.

END_OF_DOCUMENT_TOKEN_TO_BE_REPLACED

Depending on the circumstances surrounding a fatality caused by another’s negligence, Indiana statutes may place limits on the monetary value of the human life taken when it comes to compensating the remaining family members for their loss.  Known as a “damage cap,” such limits may be triggered by the status of the negligent actor being a qualified healthcare provider or a governmental entity. Another damage cap depends on the dependency of those family members left behind, which is the topic of today’s blog.

The Indiana Court of Appeals recently ruled that the adult son of a decedent was not a dependent for purposes of Indiana’s General Wrongful Death Statute and that he could not pursue an alternative survival claim based upon the Defendants’ admissions of liability. In Franciscan ACO, Inc. v. Newman, Virginia Newman was being transported by an employee of Franciscan ACO, Inc. and/or Franciscan Alliance, Inc. (“Franciscan”). During the transport, Virginia and her wheelchair were not properly secured, and when the employee turned, Virginia and her wheelchair fell over. Virginia suffered injuries and subsequently died. Virginia’s son, Vaughn Newman, filed a lawsuit alleging wrongful death and asserting an alternative survival claim for his mother’s injuries.

Defendants filed an answer in which they admitted the factual allegations in Vaughn’s complaint as to negligence and that the negligence caused Virginia’s death. They thereafter filed a motion for summary judgment arguing that Vaughn was not a dependent under Indiana’s General Wrongful Death Statute and was therefore limited to the $300,000 cap for loss of love and companionship under Indiana’s Adult Wrongful Death Statute. They also argued the evidence established that Defendants caused Virginia’s death, and therefore, Vaughn’s survival claim should be dismissed. After holding a hearing, the trial court denied the Defendants’ motion.

END_OF_DOCUMENT_TOKEN_TO_BE_REPLACED

A few months ago we wrote about an Indiana Supreme Court decision granting a plaintiff a new trial as a result of a trial court’s refusal to strike a biased juror for cause which caused the plaintiff to lose a peremptory strike of another juror.

In Floyd v. Neal, the Kentucky Supreme Court reversed the Kentucky Court of Appeals decision to give an alleged medical malpractice wrongful death victim’s spouse and her late husband’s estate a new trial under similar circumstances albeit with a twist of facts.

The Kentucky Court of Appeals had concluded that a juror was biased and should have been struck for cause and that the plaintiff should have thus been able to use a peremptory strike on another prospective juror who was ultimately empaneled.  In other words, a peremptory strike was utilized unnecessarily, depriving the plaintiff of utilizing it later.  The Supreme Court, over a lone dissent, concluded that the plaintiff failed to preserve the error, even though the error apparently would have been preserved under the language of then-existing precedent.  The dissent took issue with the Court’s retroactive application of a clarified striking procedure and the constitutionality of allowing a juror with an admitted bias to sit on the jury. Of significance to the Supreme Court’s decision was that in identifying the peremptory strikes she would have used, the plaintiff identified not one, but two jurors, when she only had one peremptory strike remaining.

END_OF_DOCUMENT_TOKEN_TO_BE_REPLACED

The Indiana Supreme Court recently held in Brewer v. PACCAR, Inc. that a component part manufacturer (PACCAR) may have a duty to offer or install necessary safety features under Indiana’s Product Liability Act (IPLA). Because issues of fact existed as to whether the safety features were offered and necessary to make the final product safe, the Court reversed the trial court’s finding that PACCAR owed no duty, as a matter of law, to install safety features that the injury party alleged were necessary.

The IPLA subjects a manufacturer of “a product or a component part of a product,” I.C. § 34-6-2-77, to liability for physical harm caused by a manufacturer placing “into the stream of commerce any product in a defective condition unreasonably dangerous to any user or consumer,” I.C. § 34-20-2-1. A product is defective under the IPLA if it is defectively designed, if it has a manufacturing flaw, or if it lacks adequate warnings about dangers associated with its use.

Rickey Brewer was a construction foreman killed when a semi driver backed up a semi with an integrated PACCAR glider kit, did not see Rickey, and pinned him against a trailer, killing him.  His widow and his estate asserted an IPLA claim against PACCAR. The claim asserted PACCAR’s glider kit was defectively designed because it lacked certain safety features to reduce the danger inherent in its forty-foot blind spot. (If you drive a vehicle with a rear camera and sensors, you can probably attest to the peace of mind and safety such devices add to our everyday life). Here, because a design-defect claim is based in negligence, Brewer would need to be able to prove at trial that (1) PACCAR owed a duty to Rickey; (2) PACCAR breached that duty; and (3) the breach proximately caused an injury to Rickey. The only element at issue in the case was duty—whether PACCAR lacked a duty, as a matter of law, to install certain safety features.

END_OF_DOCUMENT_TOKEN_TO_BE_REPLACED

What are punitive damages?

Punitive damages are a creature of common law and have been allowed for under certain circumstances by Indiana’s legislature under Indiana law. Cheatham v. Pohle, 789 N.E.2d 467, 471 (Ind. 2003); Ind. Code §§ 34-51-3-0.2 to 34-51-3-6. While the purpose of compensatory damages is to make a plaintiff whole and otherwise value a plaintiff’s injury, punitive damages serve to deter and punish wrongful activity and behavior. Cheatham, 789 N.E.2d at 471.

What is the standard for obtaining an award of punitive damages in Indiana?

END_OF_DOCUMENT_TOKEN_TO_BE_REPLACED

Yes, according to the Indiana Supreme Court decision in Myers v. Crouse-Hinds Div. of Cooper Indus., Inc., 53 N.E.3d 1160 (Ind. 2016). In this case, the Court consolidated three appeals involving the constitutionality of the Indiana Product Liability Act statute of repose as applied to plaintiffs who had suffered mesothelioma-related illnesses and in one case death.

END_OF_DOCUMENT_TOKEN_TO_BE_REPLACED

The Indiana Court of Appeals recently upheld the grant of summary judgment in favor of the estate of a vehicle driver who suffered a heart attack and became unconscious while driving, which resulted in his vehicle speeding up, going off the roadway, and crashing into a nearby house. The vehicle driver died and his passenger, who brought suit against his estate, suffered severe injuries.

In Indiana, a plaintiff must establish three elements to prove negligence on behalf of a defendant: (1) a duty owed to the plaintiff by the defendant; (2) a breach of that duty by failing to comply with the applicable standard of care; and (3) a compensable injury proximately caused by the breach of that duty. Under Indiana law, individuals must conform their conduct to that of a reasonable person under like circumstances. Summary judgment is appropriate when the defendant negates at least one of the elements of the plaintiff’s claim. While the element of breach is usually a question for the jury, where the relevant facts are undisputed and lead only to a single inference or conclusion, the court may determine as a matter of law whether the defendant breached a duty.

The defendant estate in this case claimed it was entitled to summary judgment on the element of breach because the vehicle driver could not be found to have acted unreasonably in causing the collision when he suffered a heart attack and was rendered unconscious. The plaintiff passenger argued that the defendant driver was negligent for driving in the first place given his medical condition. While the vehicle driver had recently suffered a prior heart attack and undergone treatment related to his heart condition, at the time of the collision, he had been cleared to drive by his medical providers. Based upon this evidence, the Court found that the passenger plaintiff failed to create a genuine issue of material fact as to whether the defendant driver’s sudden physical incapacity was reasonably foreseeable, so as to hold him negligent for driving in the first place.

END_OF_DOCUMENT_TOKEN_TO_BE_REPLACED

Legislators in Indiana and Kentucky have enacted laws mandating medical review panels in cases where individuals allege they have been harmed by a healthcare provider’s negligence, commonly known as medical malpractice.  Under legal challenge, Indiana found the legislation constitutional, whereas Kentucky did not.

Long ago, prior to enacting this legislation, Indiana’s and Kentucky’s founders provided as part of their Constitutions that their courts should be “open” and justice administered freely and “without delay.”

Article I, Section 12 of the Indiana Constitution provides:

END_OF_DOCUMENT_TOKEN_TO_BE_REPLACED

The Indiana Court of Appeals recently issued an opinion in Biedron v. Anonymous Physician 1 addressing the applicable statute of limitations in medical malpractice lawsuits in Indiana.

Biedron involved three related medical malpractice claims, which were consolidated for the purposes of the appeal. Proposed complaints for medical malpractice were filed by the plaintiffs with the Indiana Department of Insurance more than two (2) years after the alleged malpractice occurred in each of the cases. The plaintiffs in each of the cases argued that the 2-year occurrence-based statute of limitations, as set forth in the Indiana Medical Malpractice Act, should be tolled under the doctrine of fraudulent concealment. With differing trial court orders on the defendant healthcare providers’ motions for summary judgment on the statute of limitations issue, the Indiana Court of Appeals affirmed in part and reversed in part, finding in favor of the Indiana healthcare providers.

Under the Indiana Medical Malpractice Act, a medical malpractice claim, whether in contract or tort, may not be brought against a healthcare provider based upon professional services or healthcare that was provided, or that should have been provided, unless the claim is filed within two (2) yeas after the date of the alleged act, omission, or neglect, except that a minor less than six (6) years of age has until the minor’s eighth birthday to file. Ind. Code § 34-18-7-1.